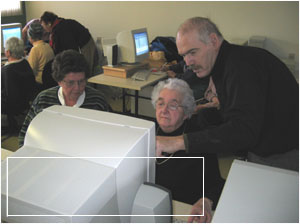 We are proud of the IT Award we won in 2004. Ruby Cousins, founder, accepted the award.

After computer skills were mastered, the group took on the task of digitizing the MacGougan 35 piece scrapbook collection for the Malpeque Historiacal Society under the guidance of KenNet technical staff and with the use of the computer lab. Financial assistance was given by the Federal New Horizons program. In 2007 another project was done by the club using the Ancestral Quest Genealogy Software. In 2009, the club is considering a study and compilation of the history of century homes in Kensington which we hope to begin in January 2010.

Members come and go but we have always maintained a membership of twenty who take a keen interest in any project undertaken by the Senior Surfers Computer Club.